To the Origin of the Word “Yoga”

Inspired by watching a nice Indian series about relations between Shiva and Sati.

This article for sure comes as the off-top in this part of the blog, but now I can’t be bothered to find some other place to speak out, thus I will take the liberty of doing this prank.

And so, the word “yoga” is well known to have originated from the verbal root “yuj” meaning “to join / unite”. The only question is – what is this united. There are traditional answers to this question, like: the body is united with the spirit, the “cart of feelings” (the metaphor from Svetasvatara Upanishad and Bhagavad-Gita) is put under control, in the context of hatha yoga they are the parts of bodies, and so on. In general, it all deals with “internal” conjugation. However, I have another one, rather unusual, hypothesis that has occurred to me. The series that I saw yesterday and the image of Shiva spelled out there has reminded me of a theory about shamanistic origin of this image that is obvious to most of culture experts.
Let me remind that the oldest (as they think) figure of Shiva Pashupati from Mohenjodaro seals already contains an obviously shamanistic element – the horned mask. And the elements of the later period: having a drum, sprinkling ashes upon one’s body, having one’s own sacred tree (rudraksha) which seeds he has with him (sometimes the route of a shaman goes through the branches of the World Tree), one’s “own” mountain Kailash (the World Mountain), cobras on the body resembling the spirit-guides, vahana or the mount, abiding in the borderline states both in physical (cemeteries) and psychical (smoking hashish) senses, the dance and hundreds of other analogies. 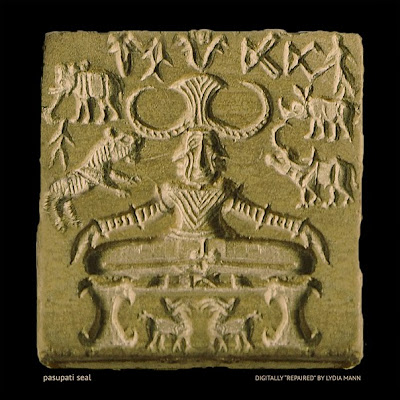 Shiva is considered to be the “Master of Yoga”. One may see details about shamanistic roots of yoga and analogies between yoga and shamanistic practices in respective sections of my monograph. But let us note that the basic function of a shaman is to link (unite!) different planes of reality (Realms, the branches of the World tree and so on). And in this sense we start to treat the Sanskrit root “unity” in a different way.

The situation has reminded me of sacral meaning of the Chinese hieroglyph wan (the ruler) that initially pointed out at shamanistic functions of the governor. This hieroglyph looks like three horizontal lines (that symbolize the Worlds of the shamanistic mythology) crossed by a vertical one that conveys the idea of travelling through these worlds.
Posted by Andrey Safronov at 11:42 PM