The next case of Krakow conference that I would like to share is the unusual double report made in form of a discussion between two classics of modern Indology – Philipp Maas and Michel Angot. The subject of the discussion in itself was very interesting – it dealt with Yoga Sutras authorship. But even if it were not for such a provocative and challenging topic the debate between these two persons is still worth listening to. With both being the world leading experts in the field they represent, the contrast between the speakers is nevertheless so striking that one would hardly imagine it. And it is not only their personalities but the method of scientific thinking that this difference involves. While listening to them debating I had a feeling that they were the two mentalities - a French and a German one, both profound and solid yet so unlike – that the discussion was held by… While the speakers were as if playing the roles of their archetypical representatives. 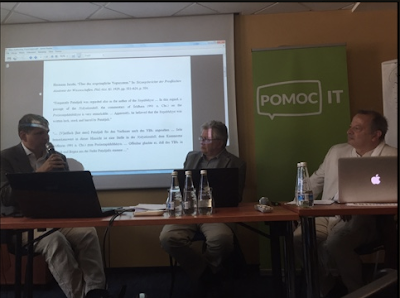 So I shall start with a few words about the reporters.

Philipp Maas works in Vienna and he is a world leading expert in Sanskrit texts computer-aided analysis. As far as I’ve understood he explores the texts statistical analysis and the search for correlations and borrowings that different texts have. Here is an interesting fact: the algorithms they use in the process of data analysis are similar to those applied in genome deciphering. Maas positions himself as a pure scientist. At least when one of the speakers in a half-joking manner asked that those of the audience who practice any of yoga practices raise their hands there were just 2 or 3 out of a hundred that remained with their hands down – and Philipp Maas was among them. The style that Maas chooses for his material presentation is concise and strict, complemented with precise citations and clear illustrations.

Michel Angot is his direct opposite. A renowned Indologist whose knowledge of Sanskrit and Vedas comes from authentic tradition, an author of numerous translations and books – he is a personification of French aesthetic and poetic humanities. Every speech of his, or even a small remark casted was like a small show. Angot is a fascinating presenter who comes from the rare category of speakers one can listen to whatever is the topic he speaks on – just because mere listening to him is already a pleasure. Angot has a perfect command of his voice (just to say that the sphere of his scientific interests includes the methods of Vedas recitation) and other means of expression. For instance, a report that starts in a low soft voice flavored with melodious French accent would be out of a sudden entwined with singing of Vedas, loud-voiced and in perfect Sanskrit; or imagine Michel who in the middle of his speech suddenly jumps onto the table and proceeds from over there. Generally speaking, when Angot was presenting his material the audience, already polite and attentive, was growing numb. 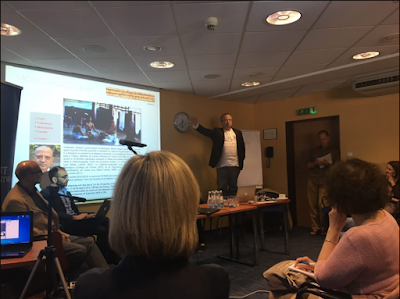 I have already mentioned the subject of the discussion that the event organizers were so generous (by standards of scientific conferences) to have allowed a whole hour to be the authorship of Yoga Sutras. We traditionally assign this to Patanjali, but who was it exactly whom we know by this name? Any reliable data in this respect is missing, while the image has overgrown with a good deal of myths. Philip Maas has advanced an unexpected hypothesis that he might had been cherishing for a long while. From his point of view Yoga Sutras was authored by the one who is usually referred to as its first commentator – Vyasa. Moreover, according to Maas his “Yoga Bhashya” that I have more than once mentioned in my blog and that the science of today believes to be the commentary of Yoga Sutras is actually the root text proper, while Yoga Sutras is just a brief summary of the said. A rather unusual and unexpected opinion that breaks all traditional molds: Vyasa disguising himself under the nickname of “Patanjali”… Let alone the fact that in this case Yoga Sutras becomes at least five hundred years “younger”…

Maas himself has fairly admitted that he lacks any ultimate proof of such opinion, tough there were a number of indirect evidences. For instance, all chapters of “Yoga Bhashya” end up with a ritual formula “this was the section (no.) of Patanjali’s Yoga Sutras” though it would be more logical to finish with “this was the section (no.) of Vyasa’s Yoga Bhashya”. Maas has also found some direct quotes from “Yoga Bhashya” in Buddhist texts, though the author attributed them to Yoga Sutras. This of course can be interpreted in some other way, yet such possibility is worth thinking over as well.

The speech of Michel Angot has surprised by lacking (at first sight) any counter-theses. he was on the contrary disputing the correctness of the “authorship” category in the context of Ancient Indian culture. He believes early texts first to have been created by a group of people and second to have been written “from hearsay” rather than by putting down in form of a text in European manner. In fact, his model represents early texts to be a kind of “brahma-vakya” (talks or discussions of the wise men written down by their students). Therefore the question of who Patanjali actually was is totally incorrect.

At the same time Angot has come up with elegant arguments against the idea of Yoga Sutras to be merely a part of “Yoga Bhashya”. He based himself on a well-known hypothesis telling that they are most probably only the first three chapters (padas) of Yoga Sutras that are authentic, while the forth one was written somewhat later. This idea is substantiated by the fact that in Yoga Sutra the particle “iti” that an Indian text usually ends with is used twice – at the end of the third and fourth chapters. Besides, the logical style of the fourth chapter obviously differs from that of others. Whereas the first chapters follow the principle “A is B”, the scheme that chapter 4 comes with is “A is not B”. There are also some notional inconsistencies if compared to chapters one and three that clearly indicate the chaptern 4 to have been probably written in polemics with Buddhism and under its influence. Yet “Yoga Bhashya” consists of 4 sections!! It means that Vyasa was commenting on a fully completed text, this being a weighty counter-argument to the idea of Philip Maas. Of course the hypothesis of Yoga Sutras initially having three chapters does not have an absolute rigorous proof as well. All afore-listed facts may have totally different explanations. But some other facts emerging during the conference in a way confirmed this view. For instance, a recently found Javanese yoga treatise of the XII cent. – the “Dharma Patanjala” that I have told about in the previous posts and that in fact comes as a rendering of Yoga Sutras, also contains 3 chapters! Probably it was due to the fact that it was the original unfinished text that was brought to Java. Just like in case of Al-Biruni’s “Kitab Patanjal”…

Following the spirit of politically correct Europe the debate has not come to any resulting conclusion and made it possible for the audience to raise their own questions and think about the answers.

I cannot but express my opinion that is based on delving into the applicative nature of both texts. I consider Patanjali’s Yoga Sutras and Vyasa’s Yoga Bhashya to be not merely different texts written by different people, but them to bear absolutely different meaning. I see a brave mystic and reformer standing behind the text of Yoga Sutras (see the article on new ideas in Yoga Sutras) while Vyasa appears to be a pedant and classifier. Moreover, I consider Vyasa to have significantly simplified the cognitive discourse of Yoga Sutras having introduced there some religious elements, maybe, in terms of the said polemics with Buddhism. It was Vyasa who started talking about “thoughtlessness” in yoga, distorted the notion of Samadhi and brought some new words to the original text.
Posted by Andrey Safronov at 2:09 PM