Sutras1.12 - 1.15. The Methods Abhyasa and Vairagya and Ajna Chakra Petals

Let us step back from our reflections on gunas and return to abhyasa and vairagya. Having taken another thought about these methods I have noticed an apparent analogy with the way the right and left petals of ajna chakra are unctioning.

And after this I recalled my concept of right- and left-petal meditations that I set forth in my first book - “The Psychology of Spiritual Advance” published in 1995. 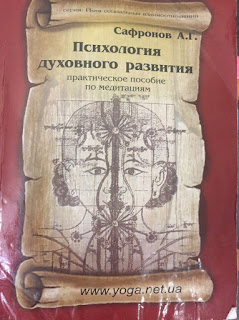 Despite the simplicity of its presentment I still believe the idea itself to be true and accurate, that’s why I shall draw an excerpt and some explanatory illustrations from the book completing them with my commentaries of today that I will highlight in italics.

“Since, in fact, not only the methods, but the modes of meditation differ as well, we will briefly dwell on the issue of meditation typology in accordance to their performance technique.

In scope of the first-type meditations the attention is focused on the signals that are coming from the object. We involuntarily perform this meditation when we are looking at something intently, listening to something or smelling something fixedly, as well as in terms of our “feeling into” emotions, pain symptoms or other sensatory data of the organism... This is a double-effect meditation. Of the one hand, concentration upon some inner object leads to its actualization, i.e. its conscious perception that facilitates the extension of consciousness. Of the other hand a long-time concentration may result in attention logoff due to fatigue, and thus cause the state of autohypnosis. 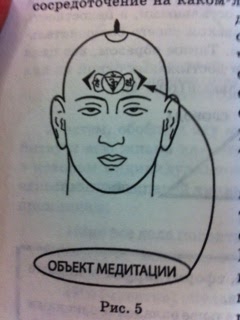 Here I should emphasize that in order to feel into one’s emotional or some other personal manifestations one should disengage from them; the simple process of looking after emotions and roles takes the person beyond their scope, that’s why this type of meditation completely conforms to vairagya method.

The second-type meditations come in different forms of suggestions (infusions), i. e. active management of organism functions by means of volition. Depending upon the mode of volition command delivery these meditations can be divided into visualizations, verbal and kinesthetic suggestions. The initial two types are the mostly practiced ones. In case of visualization the volition command is transmitted to the subconscious mind in form of some comprehensible visual images, pictures, forms. The mostly known meditations of such type are visualization of energy flow as a radiance of some particular color, meditation on chakras’ icons (pumping-up), organs, mandalas etc. Verbal infusions include meditations in scope of which a volition command is delivered in verbal form, as it is done, for instance, in the system of Schultz autogenic training (“My right arm is heavy”) and E. Coue’s autosuggestion (“Every day, in every way I am getting better and better”).

Those practicing kinesthetic suggestions use their will, their conation in trying to stir up various sensations in their bodies – those of heaviness, levity, featheriness etc. (for instance, the Shavasana). 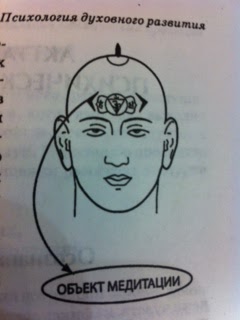 It is obvious that the choice of the meditation type that is most effective for a certain person should be based upon his individual features, in particular, his predominant system of perception. Here we should say that only meditation of the third type is, in fact, a real meditation as it is, and this is a synthesis of both types of exercises mentioned above. The practicing adept simultaneously gives volition commands directed upon changing of the state and contemplates his state, in this way being able to control the efficiency of these commands and improve them, and thus increase feasibility of reaching the expected state». 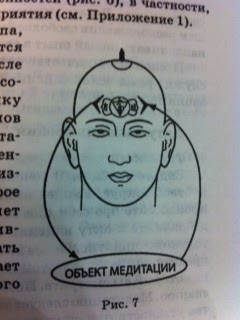 Posted by Andrey Safronov at 12:16 AM