Sutra 1.2. Nirodha. The problem of emotional content of the practice

Some translators also used the terms "cessation", "obedience", "retention", "containment", "oppression". It would seem that they all speak about one and the same. However there are still some questions in here that arise within the process of thorough examination. Despite the fact that translation variants of the word nirodha are formally similar one may easily see that in terms of emotional content they are very much different. "Destruction" and "containment" are yet different things, and if it is the heroic pathos of a young Kshatriya that we here in the first case, the second once comes as a placid stoicism of a mature man. And now compare the emotional content of the words "suppression" and "cessation".[1] This is asceticism vs technocracy J. These all seem to be just details – but they are not. The emotional content of these words affects the emotional content of the whole subsequent practice, and therefore it affects its core essence.

I must say that the Hindus themselves don’t share a common idea concerning the emotional content of nirodha as well. Let us just compare the initial aspects of yoga practice, that is, hatha yoga of different schools, in order to see the different meanings of the word explicated in terms of reality. For instance, we compare the attitude to one’s body as interpreted by the schools of Iyengar and Sivananda. In the first case they really “conquer” and restrain the body, while in the second case the body is rather "trained” in a mild way. The followers of Yogananda [1] believe that the development is possible only subject to ultimate loads upon one’s body, and those of Pattabhi Jois "wear out" their bodies and "boil up their blood" considering the state of thoughtlessness that occurs after an intense practice to be the cherished chitta-vritti-nirodha [2].

One can also see fundamental differences in respect of practice delivered by different schools within the Russian-speaking territory. In you compare, for instance, the approaches to one’s body proposed by Boyko and Sid you will see the consequences of that different emotional content of the words "cessation" and "curb”J.

The practice based upon contents that are different at some higher levels shall be even more diverse. Thus if we lay different interpretations of the word nirodha into the system base we shall obtain either ascetic practice or a form of green hedonism (follow your true nature and all the rest shall comeJ), or the practice of self-bridling and self-discipline that is close to Greek gymnastics and modern sport, or some infinite number of totally dissimilar systems.

By the way, speaking about "curbing" I cannot but make one associative side note. Some expressive yogis so much like the word "curb" as translation of nirodha that for the sake of dramatization effect they correlate the term yoga itself with "yudj" – the harness. And so we have a good and consistent metaphor of yoga correlated with the image of a cart from the Upanishads (The human body is a cart, indriyas – the sense organs – are the horses, manas is the charioteer. And the cherished question of the Upanishads is: does the charioteer has a master who tells him which way to go?). However if we develop the metaphor we might say that even driving a horse cam be done in a different way (with different emotional content). It is not for nothing that the mostly appreciated skill among riders is that of riding a horse without harness and stick, only by means of mutual understanding. Does it correlate with something referred to the person’s inner work? Is it possible to "make friends" with one’s vrittis and not to suppress them? Of course I ride past the hounds and this reasoning is premature, but I will still draw it here as an example of the practice based upon some milder emotional content of nirodha. It is known that in the eastern iconography (India, China, Tibet) they depict many Gods and Creatures as riding their mounts – the vahanas. There is an exoteric interpretation of this fact (each tradition has the one of its own) that as a matter of fact makes no interest to us. But the roots of the mounts’ concept can be easily found in the progenitor of all religious forms - and by the way, mystical traditions as well – in shamanism [3]. Setting forth on the spiritual journey the shaman mounts his spirit guide (that on physical level is usually personified in tambourine). Such mastering the tambourine (or, rather, the spirit) in fact represented the process of mastering one’s animal nature, its taming. The idea of mastering one’s psyche personified in the form of an animal can be found in Taoism (taming the dragon), Tibetan yoga (the famous picture describing the phases of ascent that features the elephant) and Zen (parable about the buffalo). In generalization of this idea we shall follow the Jungians and set it up that the archetype of a rider is a symbol of a person or deity that has completely mastered its instinctive nature, while the kinds of animals are the personality traits (totems J) of this nature. Here we may at once recollect another iconographic symbol – the skin of a dead animal (deer, tiger, elephant, snake) that the ascetic sits upon. Isn’t it an archetypal image of understanding the difference between practices? It is the study of asceticism that’s been always seeking to suppress the man’s instinctive nature rather than to use it. However, it is still more interesting to ride an animal than to sit on its skin. 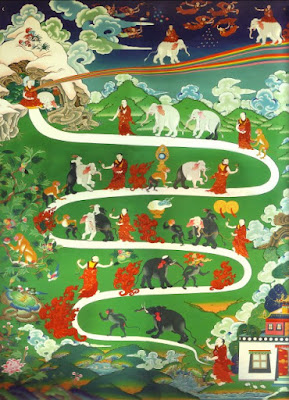 Yet, I have a bit wandered off the point. Or have I not? A good thing here is that this is my blog and I have nobody to report to J.

(the reflections regarding nirodha shall be continued)

__________________
[1] Unfortunately now it is impossible to find out whether Yogananda practiced yoga this way himself, so I can only refer to observations of the practice performed by his students.

[2] Once again, I have heard this not from Pattabhi but from his students so I admit this to be their interpretation. However, the fact remains. Such attitude to practice does exist.

[3] Well, I guess after this phrase the representatives of some traditions will blow their topsJ.
__________________
[1] [1] Here we should not that this blog is the translation of the original blog that the author keeps in Russian. In terms of translating this article from Russian into English we have searched for translation of “nirodha” in several Sanskrit-English dictionaries and we have failed to find anything that would come close in its meaning to “bridle, harness” and “restrain, control, suppress” simultaneously, the main translation variants mostly being “confinement, prevention, imprisonment, repression, coercion, disappointment”. Yet without connotation to “harness” and “taming the animal” the second part of the article would be unclear to English-speaking readers. Thus we have used the word “curb” as the one having both the meanings of “suppression” and “bridling the horse”. But once again – this is not the translation variant provided for “nirodha” by Sanskrit-English dictionary.
Posted by Andrey Safronov at 6:15 PM