Does Yoga Evolve, or Can You Trust Primary Sources in All Aspects? 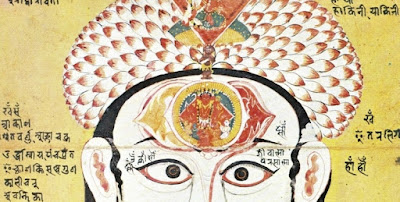 This short item has been initiated by my reading a pretty nice article about chakra system. The author points out (not without reason) that most of today’s notions about chakras are absent in traditional Hindu texts. He is however mistaken as to the list of these “missing points”, probably due to the fact that many texts related to chakras seem to be not known to him.

Now, the author notes, different Hindu texts describe various variants of chakra system, not only the seven-chakra one. And an eventual conclusion he thus makes is: Europeans don’t actually understand what they do. This opinion can be rather often found in the works of experts in Indian culture, both scholars and those who deal with aspects of religion. They ponder on various questions of initiation and specific parampara (the lineage of gurus), advance the idea telling that practice beyond a legitimate tradition is impossible, and promote other kind of (as I have it) pseudo-religious nonsense that includes vituperative (as they think it to be) blaming (each other) for following the ideas of New Age and engagement in theosophy.

I shall further brief my view of the problem.

1. Mankind does evolve. Those who disagree are welcome to DM me their arguments. On papyrus with a stick. So that I can read it under a full-moon light.
Mystic traditions – including Yoga – also make progress. For instance, there were only 6 asanas in hatha-yoga of Vyasa period, and several dozens in that of Pradipika times. Today we have them in hundreds. Though this is not a continuum and throwbacks are possible – the periods of temporal decline of the system in general, or some of its views.

2. Man also evolves. For instance, some thirty to forty years ago Jasques Mayol’s best result in holding the breath was ca. 5 minutes. Today this record is 24 minutes! Or you may see the difference by comparing gymnastics competitions, the 50 years-old archives and those of today. How does it come? It’s just a more sophisticated training and workout method that fosters human progress.

3. All esoteric traditions deal with interpretation and reconstruction of same mystic and mind experience of transforming kind (for details see my monograph on mind-practices). The sameness of this experience is secured by uniformity of human mind arrangement. Of the other hand, due to its inherent specifics, this experience cannot be expressed fully, though it is to be talked about at least in order to develop practices that enable its reproduction. The advance in mystic traditions is related to sophistication of descriptive discourses that is conditioned by added complexity of cultures that have engendered them. Harmonious sophistication of discourse results in formation of more effective practices. While excess makes these systems turn religious and leads to their decay.

4. The corresponding experience is not a province of just one culture or one era. The experience of European thinkers is not worse than of that of Hindu men; it has the same nature and origin in modern mystics as it had in ancient rishis. Looking down upon Theosophists or representatives of New Age is a form of gerontarchical thinking that is grounded on the principle “old things work better than new”. After all, at the time of their inception the ides of ancient sages were young as well, and I’m sure they were also scorned by traditionalists of those times.

5. Yoga is not creation of Indian culture only, it has definitely been absorbing all interesting tendencies throughout the centuries of its existence. For instance, there are many studies about the way Sufism had influenced the formation of bhakti practices (and vice versa). As to the contribution of European style of body training to the 20th century new schools (Pattabhi Jois, Iyengar), there is a dedicated book written on the subject (by M. Singleton). This influence is still in progress, in particular, due to the works of Jung.

Resume. Old texts are many. One should read them to pick out from them the ideas that are interesting, and the techniques that are effective and applicable. Or if they study the history of the subject the way I do. But one should not make a fetish of them. Let alone fixate at the once-upon-a-time level of a problem understanding. And yes, it’s true: we do know about chakras much more than texts have it.

Posted by Andrey Safronov at 5:10 PM