In my two previous posts I have without further ado explicated to the reader my understanding of the “ishvarapranidhana” category introduced by Patanjali. Yet an attentive reader might remember that the author of Yoga Sutras tends to give the definition of the new concepts in the lines that follow their introduction. Now, does the understanding of ishavara proposed by me meet the definition that was given by Patanjali?

The sutra 1.24 that comments upon the previous line – the one about ishvarapranidhana – goes as follows:

kleśa (m.) - the klesha that we already know, the word that derives from the verbal root √kliś;

vipāka (m.) – an interesting word that the dictionary translates as effect, ripening, results; yet we can ‘sensate’ the word if we look at the word-formation: the prefix vi- that often equals the Russian ‘вы-‘ [out, off, out from – translator’s note] + the root pāka – a noun that derived from the verbal root √pac (to bake, to cook). That is, the original meaning of the word is baked goods. It metaphorically accords with its dictionary meaning, and with figurative vein of Yoga Sutras as well. And indeed, if karma has seeds and fruits why cannot it result in baked goods))). That is, a kind of a karmic muffin… J.

āśayair (m. instr. pl.) - residue, trace, is formed by the prefix ā (over here, to) and the word stem śaya derived from the verbal root √śī (to lie, to rest);

puruṣa (m.) purus(h)a – we will discuss the meaning of this word later on;

In this way we can arrange the following interpretation:

1.24. Ishvara is a particular purusha untouched by kleshas, karma, fruits and imprints.

If we take into consideration typical translations of the word purusha – them been man, human, sometimes – person, we will at first glance come to a purely religious reading that most of commentators used to come down to. This model however is inconsistent from the point of philosophy, and it was yet Vyasa who pointed this out (I shall remind here that he was one of the first commentators on Yoga Sutras). In his comment upon this line he highlights the philosophical paradox that follows from these speculations. Indeed, in case ishvara is a particular purusha untouched by karma etc., then the one who has attained kaivalya (liberation-isolation, though, of course, I have my own interpretation of such term) shall also fall within this definition. And Ishvaras turn out to be numerous… This consideration could not but have occurred to Vyasa whom we remember to be well-acquainted with Buddhism, since in Buddhism they used to talk about variety of Arhats, Bodhisattvas and even Buddhas at ease, thus denying the exclusivity of these statuses in the mass consciousness of those times. Unfortunately – or, may be, it happened in terms of arguing against Buddhism – Vyasa solved the paradox in the most banal way: by having plunged into even bigger religiosity in the form of monotheism.

“Then there are those who have obtained Isolation; and those who are in Isolation (kevalins) are many.
Now these by severing the three instruments of bondage have obtained Isolation; and the Icvara’s relation to this [Isolation] belongs neither to the past nor to the future, [but is eternal]. Thus it is not with Him as with the [ordinary] liberated [Self] that there has been expressly made known a terminus a quo of bondage (pilrvd bandhakoti). Nor it is with Him, as it is with one [whose body] is resolved into primary-matter, that there is a terminus ad quern, when bondage might recur. But He is at all times whatsoever liberated and at all times whatsoeven the Icvara!
But it might be asked “That universally admitted eternal superiority (utharsa) of the Icvara which results from his assuming a sattva of perfect (prakrsta) quality has that any proof [to authorize it], or is it without proof?
[The reply is, His] sacred books (cdstra) are its proof.
[But then] again [it may be asked], what proof have the sacred-books?
[The reply is] they have their proof in the perfect quality of [His] sattva. Inasmuch as both [the sacred books and the superiority] reside in the Icvara’s sattva, there is a never-beginning relation between the two.
From these [sacred books, therefore] this proves to be true that He is at all times whatsoever liberated and at all times whatsoever the Icvara. Now this His pre-eminence (aicvarya) is altogether without any-thing equal to it or excelling it. For, to begin with, it cannot be excelled by any other pre-eminence, because whatever might [seem] to excel it would itself prove to be that very [pre-eminence we are in quest of]. Therefore that is the Icvara wherein we reach this uttermost limit of pre-eminence. Nor again is there any pre-eminence equal to His“.

The model proposed by Vyasa was “with flying colors” taken as a basis for religious commentaries upon yoga, and it exists until now, begetting a number of secondary religious allusions in the course of contacting with other traditions. For instance, purusha, when translated into European languages, has already become one’s soul, or a Universal spirit and God (in the Christian sense). This, of course, is as ridiculous as the already mentioned identification of the “soul” that the shaman catches and brings back in the course of his journey with the soul of Christianity, especially since there are several souls (up to 5))) that a shaman had. Such views, just like any religion, are subjected to repeated multiplication, begetting pseudo-yoga and the “pearls of wisdom” like, for instance, the one below: 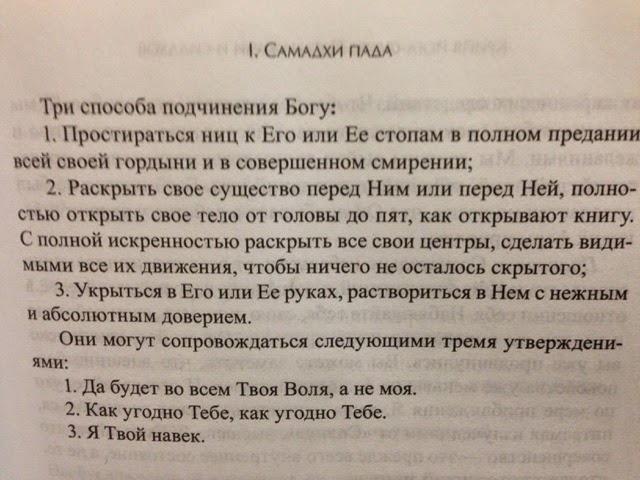 There are three ways of obeying to God:

1. To throw oneself flat next to His or Her feet in complete rejection of one’s arrogance and in the state of complete humility;
2. To open one’s self in front of Him or Her, to open one’s body from the top to the bottom completely, in the way like a book is opened. In perfect sincerity to open one’s all centers, to make all their moves visible, so that nothing concealed shall remain;
3. To take shelter in His or Her arms, to resolve in Him with tender and absolute confidence;

These may be accompanied by the following three statements:
1. May it be Your Will, not mine, in everything.
2. As You please, as You please.
3. I am forever Yours.

But for a practitioner this position is too primitive. Therefore, having rejected all commentaries of the kind (even if in Sanskrit), let us try to understand the meaning of this verse referring to the origin of the concepts. Namely, to the etymology of the word purusha. First, let us notice that this word derives from the verbal root √pṛī – to fill. On the other hand, the very first time the word was used was the famous Hymn to Purusha from the 10th Mandala of Rigveda that tells about the creation of the world in the course of purusha sacrifice performed by the gods. From different parts of his body there emerged various parts of the universe, living beings and so on. And is the reading of this myth alone that engenders obvious doubts about understanding Ishvara-purusha as a personalized god. For he has already been sacrificed…

In order to advance another hypothesis let us remember that the myths of such kind telling about disjointing/fragmentation of the original man can be found in many cultures: we can recall here the Chinese Pangu, the Adam Kadmon of Kabbalah and so on. The same myth in some more latent form is found in every kind of “hermetic” systems that tell about “correspondence” between micro- and macro-cosmos. And it is peculiar not only to Western occultism, but also to Tantra, the Chinese system of astrology-reflexotherapy and so on. Let us also pay attention to the fact that the elements of this myth have remained in almost every language in the form of anthropomorphic denominations like, for instance: the head (the head of the army / delegation), the right hand / second hand of the company director, a pain in the ass, to go belly up, etc. As well as in form of metaphors – “the heart of the matter” and so on. It is natural for the man to use the “body” language; moreover the body comes as a kind of closed (filled – let us remember the root √pṛī) interrelated system that one can base upon in describing other, more complicated systems. Hence there is the guess: suppose the corporeal, anthropomorphic language was one of the primary languages that the ancient man used for system description of the world? And the myth about purusha comes as mythological fixation of this fact..? But then we do have the right refer to the concept of purusha as a perceptible, a system-forming factor, that is, in fact, the simplest system of regularities. This fitting completely into my proposed commentary.

It is interesting that upon admitting such opinion we will see that this line of Yoga Sutras as if carves the way between the Vedic concept of Purusha and the Tantric concept of Ishvara. In its scope Ishvara is a static, masculine, passive-ordering element that is opposed to prakriti – the active, chaotic feminine element that is ordered by ishvara. 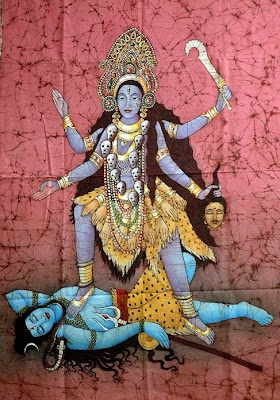 1. A THOUSAND heads hath Puruṣa, a thousand eyes, a thousand feet.
On every side pervading earth he fills a space ten fingers wide.

2 This Puruṣa is all that yet hath been and all that is to be;
The Lord of Immortality which waxes greater still by food.

3 So mighty is his greatness; yea, greater than this is Puruṣa.
All creatures are one-fourth of him, three-fourths eternal life in heaven.

4 With three-fourths Puruṣa went up: one-fourth of him again was here.
Thence he strode out to every side over what cats not and what cats.

6 When Gods prepared the sacrifice with Puruṣa as their offering,
Its oil was spring, the holy gift was autumn; summer was the wood.

7 They balmed as victim on the grass Puruṣa born in earliest time.
With him the Deities and all Sādhyas and Ṛṣis sacrificed.

8 From that great general sacrifice the dripping fat was gathered up.
He formed the creatures of-the air, and animals both wild and tame.

9 From that great general sacrifice Ṛcas and Sāma-hymns were born:
Therefrom were spells and charms produced; the Yajus had its birth from it.

10 From it were horses born, from it all cattle with two rows of teeth:
From it were generated kine, from it the goats and sheep were born.

12 The Brahman was his mouth, of both his arms was the Rājanya made.
His thighs became the Vaiśya, from his feet the Śūdra was produced.

13 The Moon was gendered from his mind, and from his eye the Sun had birth;
Indra and Agni from his mouth were born, and Vāyu from his breath.

14 Forth from his navel came mid-air the sky was fashioned from his head
Earth from his feet, and from his car the regions. Thus they formed the worlds.
Posted by Anonymous at 3:33 PM