Following the logic I should have inserted this article after those dedicated to vritti and nirodha, but since it has occurred now I shall break the linear succession in developing the ideas and place it here. There’s nothing you can do – thinking and reasoning are non-linear processes, so that when getting deep to the heart of some matter one continuously comes back to prime postulates conceiving them even deeper, or even reconsidering them J. All the more so that in one of my initial posts I promised the readers that they would witness the intellectual activity in real-time mode…

And so:
Despite its complicacy, let us remember our definition of chitta as the “inner substantial self-sentiment of a person”. It has occurred to me that this definition, just like the concept of vritti, can be well objectified and made more clear if we base this upon the track records of modern body psychotherapy and psychosomatics.
I shall here remind that the given sub-discipline of psychotherapy states that the person’s psyche is projected onto his body. I shall highlight that it’s not the brain (though this phenomenon also exists and it’s been studied well in scope of neurophysiology) but the psyche. And it reveals through a variety of aspects, for instance:
- muscular blocks and contractions occurring in case the respective emotional ones are present;
- expression of emotional states by means of non-conscious gestures;
- psychosomatic diseases; and so on.

Obviously (though it became obvious only in the middle of the XXth century due to works of Reich and Lowen) the system of psychosomatic correspondences describes the essence of the person’s chakral system.

But now I would like to speak about an effect known well to psychologists that refers to inadequacy of perception of one’s body subject to existence of emotional problems. Most probably the reader could have faced this effect when performing a projective test called “self-portrait”. The idea of the test is that the one tested is proposed to draw his self-portrait. The main point is that distortion of body proportions on the portrait, the rate of details in drawing different parts of the body reflect the existence of problems projected onto “distorted” zones.
For instance, a person who walks after his brains (abides in mental schemes yet is very weak in sensing his emotions and his body) will have his body drawn with less details than his face and head. A person suffering from non-concurrence of chakral needs will depict himself as the one consisting of several conditionally-linked parts, and so on. You can find more details about the test in the Internet or in my guidelines on “Chakral Psycho-Diagnostics”.

However there is another effect that is less known. Let us say, we have proposed a person to close his eyes and we simultaneously touch two parts of his body suggesting that he should evaluate the distance between the points of contact. For instance, they often use the trick of touching with fingers that are open wide evenly, so that the real distances between the two points of contact are the same. And the person is asked to correlate his subjective perceptions of these distances. Or one can also draw different figures on another person’s body so that the latter characterizes them. As practice shows, the less a person is subject to neurosis the more precise he is in estimating the distances and characterizing figures. That is, actually, he has a more adequate perception of himself “from inside”. In scope of proper working with such technique one can show that distortions in self-sentiment don’t occur in every place but exactly in the projective zones associated with problematic experiences or, if we say it in the language of people with extrasensory skills, in breached chakras.

The same way, a person with distorted inner self-sentiment is not quite exact in appraising the character of his performed movement (of course here we mean some complicated and “unnatural” movements). For instance, one may think that his dancing pas is graceful, but to onlookers it will appear clumsy, awkward and jerky. Moreover, if you make even simple movements, for instance, hip circles, and film them with your camera you will easily see that jerks and awkward moments occur approximately in all the same zones. These are the zones that one has difficulties in concentrating one’s attention at. The research studies that involve spirograph have also shown that the same very problem is observed in breathing. A person who makes rhythmic yoga breathing may feel “from inside” that his breathing is smooth, yet the spirograph will evidence the jerking steps of single type (in different breathing cycles) that occur while “breathing through” the problematic chakras.

Another important observation is that most people are not able to actualize on their own the distortion of their self-sentiment. This becomes possible subject to applying the procedures described above. This can be simply confirmed just by the fact that most people are not able to tell on their own (without a mirror) whether they sit with their spine straight or whether they stoop in some of its segment. This is all caused by the person’s identity with his somatic and emotional shell, his being resolved in habitual states. They are usually rather bad distortions that are noticed, the ones correlated to psychosomatic pains, like the dragging pain in the chest, clenched fists or quivering lips, etc. However with help of particular techniques one can work out the skill of actualizing such king of “etheric” self-sentiment when the presence of emotional problem is sensed “by the body” in the bud. And of course it makes sense only subject to having an efficient system of methods for resolution of such problems.

Yet coming back to the subject of chitta and vritti we can say that such “psychosomatic image” of the self sensed from inside comes as the most obvious manifestation of chitta, while the distortion of this image is the vritti. I’ve made a provision that it is “the most obvious” because I think that there are also other aspects of inner self-sentiment no longer related to physical body.

While reflecting upon this article I went to see the exhibition of primeval psychedelic art held in Paris and I saw a number of samples showing visualization of distorted self-sentiment induced by psychedelic substances (or, probably, they became visible under their effect). 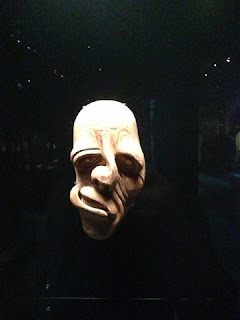 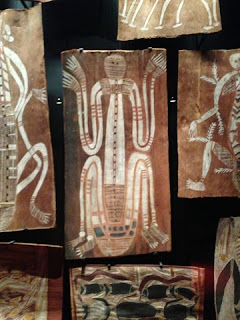 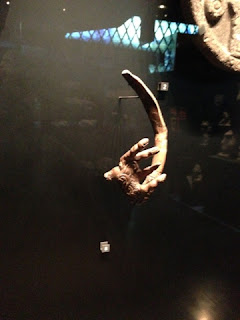 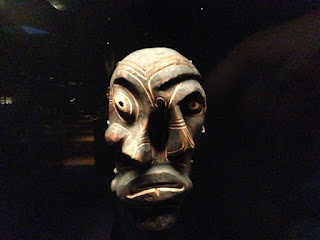 However this wasn’t quite the end of my adventures. The modern art exhibition has added some “vrittious” images. 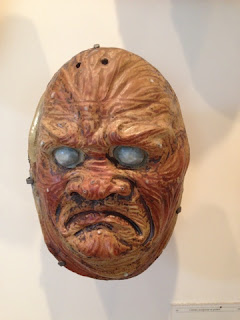 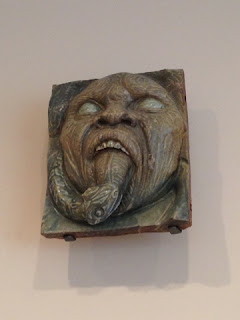 Posted by Andrey Safronov at 12:55 AM